The Tale of Tacet 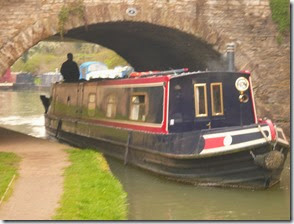 Hi, nb Tacet here.  I see this blog has had no postings for a while, it seems the Skipper and his First Mate have disappeared off, goodness knows where and I’ve been left sitting and reminiscing about my journeys over the past 14 years. So perhaps I’d better see if I can make sense of what’s going on.

It all started with a plan hatched out by Mr and Mrs Cole back in the 1990’s with boat builders Alexander and fitters at Riverview, resulting in the fine looking vessel I became. I was named Tacet by the musical Mr Cole, it’s an orchestral term to mark a quiet rest in an instruments performance. And that is what I hope those who spend time with me along the canals find…….a quiet, peaceful and relaxing rest.

After some nine or ten years taking the family away for holidays I was entrusted to Ian and Karen, the Skipper and First Mate, and wow, what a time we’ve had.  After a year of getting to know each other with short trips whenever work commitments would allow, they moved themselves on board, with that rascally hound, Jumble and we were off.  Leaving behind a house, their children were away at uni apparently and so they were free to go exploring. I was happy to oblige with my well fitted, homely interior, and well built, smartly painted exterior, we looked good together out on the cut. 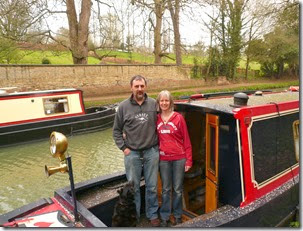 Together we have explored canals in the north, rivers in the east, tunnels through the hills, across mighty aqueducts, up and down flights of locks. For almost 3 years we didn’t stop, I did my best to serve them well. I never let them down, and the Skipper was good to me, my engine was serviced regularly, kept clean and tidy, and any little jobs seen to as soon as possible.  Inside the First Mate would clean and polish, (especially on rainy days, I noticed) and there was often wonderful smells coming from the galley.  We would often meet up with other boats and their crew along the way and got to recognise many others as we passed along the waterways. Life was grand, we were so happy together, I so enjoyed taking them around the country, marking off the maps as we covered the navigable rivers and canals, although I did feel the Skipper took a few chances in some rather shallow and reedy places where not many other boats get to go. But I never complained and secretly rather enjoyed the challenge and I thought they were pleased with me too. 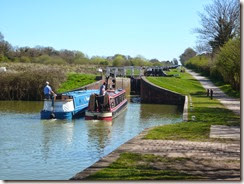 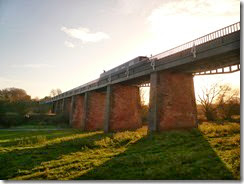 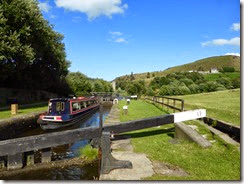 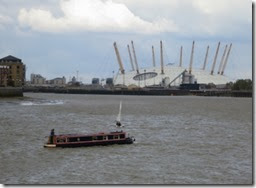 So imagine my surprise when at the beginning of November, they started going off and leaving me……… amongst other boats I must admit, but sitting quietly, not feeling the flow of the water pushing past my bows.  They would return for a bit, then off they would go again, I began to wonder what or who was taking their attention away from me, I must admit to feeling a bit jealous, and a bit hurt.

Til one weekend in January, there was such a commotion, My insides were cleaned from top to bottom, cupboards were emptied, everything was moved, washed, polished and rearranged, rubbish was thrown out and boxes packed.  I felt like a new boat! I was taken along to Stowe Hill and met up with Dominic and Steve at Rugby Boats, who came out and looked me over, asking questions, and generally poking around and then I heard a tearful voice, actually, tearful voices saying ‘Good-bye and Thank you’ and realised the Skipper and First Mate were leaving me. I couldn’t understand it, what had I done wrong?

It appeared I was now ‘For Sale’, the Skipper and First Mate were returning to the world of work, houses and cars, not sure I understand why, so Dominic and Steve were given the job of finding new owners for me.  They took photos, I tried to look my best, made a video about me and before long people came to visit, wandering through and peering in and out of cupboards, lockers, under seats and into the engine hole.  I did my best to impress, some liked what they saw, some didn’t and then along came Clinton and Sharon, I could feel their excitement as they were exploring and listened to what they were saying unashamedly.  I think they liked what they saw, liked the quality  workmanship from those first plans, like my green stove inside, liked the roses painted on the doors, liked the happy, homely feel inside the cabin. They talked about money, then phone calls were made and I held my breath as I waited.  Yes! the Skipper agreed they could become my new Crew, phew it had only been two weeks since that teary good-bye and now here was a cheery hello to some new Friends.

Yesterday Ian and Karen came back, with Clinton and Sharon to hand over responsibility for my care.  We have journeyed together down to a new home for me with lots of questions answered about the way I like things to be done, and how to keep me happy.  It has been a good day, feeling the water flowing beneath me, hearing the chink of the paddles turning and the pull of the water letting me down in the locks, feeling the crew jumping on and off and the lovely happy buzz of people enjoying being ‘on the move’. 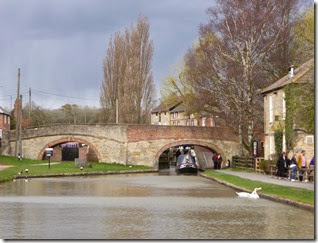 It’s going to be ok, I’ve got some new Friends, who will take good care of me and enjoy my company.  I shall do my best to take care of them too, keeping them comfortable and taking them wherever they ask me to go.  So look out for me with my new Skipper and First Mate and don’t forget to wave and say a cheery hello as you pass by. Ian and Karen
We have taken a break out of our busy lives to fulfil our dream of living aboard a narrow boat, travelling round the inland waterways of Britain. We are Ian and Karen with our slightly mad dog Jumble. Our two children are both away at University so it seemed a good opportunity to have our 'gap year' now. Think we might stretch it to 2 years to make sure we cover all the waterways on the map!